Liberals Trying to SHUT DOWN Hurricane Shelter for Not Allowing Pedophiles

Washington Post reports:
“Never before did I think that we’d be beat up for giving people a warning and keeping people safe,” Grady told local television crews. “But hey, that’s okay.”
He was referring to criticism that followed a string of tweets from his office Wednesday morning saying that anyone with an outstanding warrant would not be admitted to shelters during Hurricane Irma. Though some of the tweets singled out sexual offenders and predators, others said all people with warrants would be better off turning themselves into a secure space of a different kind — jail.
“If you go to a shelter for #Irma, be advised: sworn LEOs will be at every shelter, checking IDs. Sex offenders/predators will not be allowed,” read one tweet, using an acronym for “law enforcement officers.” The thread came from the Polk County Sheriff’s Twitter account, which uses a photo of Judd.
“If you go to a shelter for #Irma and you have a warrant, we’ll gladly escort you to the safe and secure shelter called the Polk County Jail,” read another tweet, which received more than 7,800 likes. It had also garnered more than 7,800 replies by early Thursday morning, largely from users chastising Judd for potentially endangering people with warrants as a Category 5 hurricane ripped through the Caribbean and beamed toward Florida.
The ACLU sees it differently. They’re defending sex offenders and pushing for them to be holed up with innocent victims for several nights over. It doesn’t matter that these people are not “rehabilitated” from their sexual dysfunction, liberals are more concerned about their rights than that innocent people’s, namely children, who are forced into a devastating situation that the ACLU only wants to make worse.
According to Downtrend:
Sheriff Judd also strongly recommended that anyone who has an outstanding warrant and is in need of being sheltered, to turn themselves in and he would see to it that they had a dry place to dodge the worst effects of the storm in the Polk County jail.
He also emphasized that ids will be checked at shelters and that those with warrants will be escorted to the iron bar hotel.
This, of course, enraged the Florida branch of the radical leftist American Civil Liberties Union which cried bloody murder that this fascist lawman who must be a Trump supporter is violating the rights of those who are criminals and child molesters.
You can certainly tell whose side the ACLU is on. 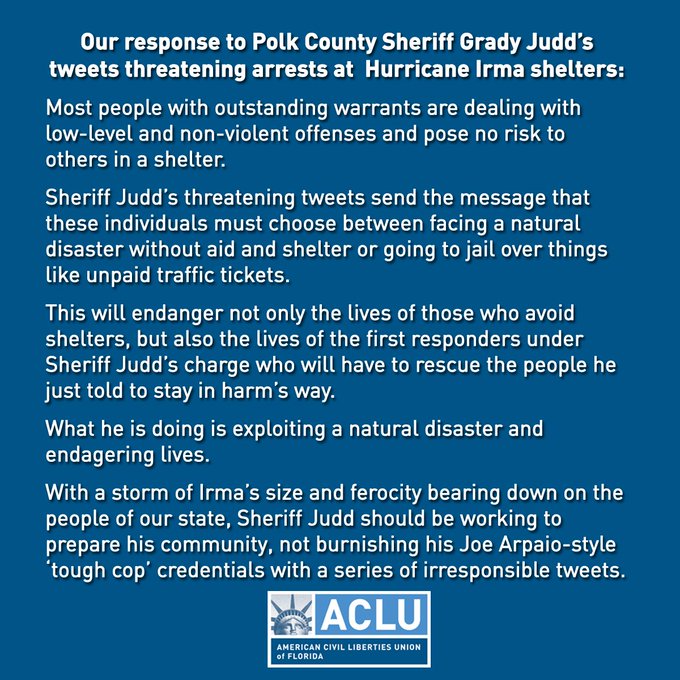 The ACLU wasn’t alone in their fight for the rights of those who lost theirs when they committed a crime. Shockingly, the Orlando Sentinel chimed in with who they think are the real victims here, and it’s those who have been convicted of victimizing others.
The Sentinel reports:
Polk County Sheriff Grady Judd is threatening to jail wanted people seeking shelter due to Hurricane Irma.
The sheriff, who is known for his outspoken comments, made the threat in a series of posts to Twitter.
“If you go to a shelter for #Irma and you have a warrant, we’ll gladly escort you to the safe and secure shelter called the Polk County Jail,” Judd tweeted to his nearly 66,000 followers on Twitter.
Judd also posted that officers would be at every shelter checking IDs and that sex offenders and sex predators would not be allowed inside.
When checking IDs, if an officer sees that someone has a warrant, that person will be taken into custody, Sheriff’s Office spokeswoman Carrie Horstman said.
Judd is actually looking out for everyone by not sending criminals into the cold and giving them a safe place to sleep in a jail cell. In doing so, innocent people in shelters can sleep as best they can, knowing that they aren’t going to be preyed upon in addition to losing all their possessions.
Maybe this hurricane and rightful reaction from the sheriff can serve as a reminder to “low-level” offenders that dodging a warrant isn’t the right thing to do. Eventually, it will catch up to you.
H/T: Freedom Daily

As the country continues to mull over whether or not President Trump is a racist for allegedly describing Haiti as a dung heap, another...
Read more
crime

News has come out of the Justice Department that not only is AG Jeff Sessions already looking into possible crimes committed by the Clinton...
Read more
crime

The horrendous shooting at a SanAntonia Baptist church by Devin Kelley that left 26 dead and many more wounded was brought to an abrupt...
Read more