The infamous former Milwaukee Sheriff, David Clarke Jnr. has announced that he will soon be joining a Super PAC (Political Action Committee) that seeks to support the Trump Presidency.
After announcing his retirement (40 years service), Clarke released his book, and many have been wondering what he will do next. For years, he was one of the few bright sparks on the Democrat side, but since Donald Trump announced his run for President, Clarke has been a solid supporter.
He’ll be joining the Super PAC as an advisor and spokesman, with the aim of furthering the MAke America Great Again agenda. Many are hoping that he will eventually take a more senior role in government.
Clarke has been an outspoken critic of race hate groups such as BLM, and is not afraid of speaking his mind. The PAC, America First, seems excited to have Clarke on board, and many are wondering if this is not perhaps a launch pad for a larger political career.

Both the super PAC, America First Action, and a spokesperson for Clarke announced that he would join the team as a senior advisor and spokesman.Trending Articles

“It’s truly an honor to join the America First Action team, most importantly because we share the same values that most hard-working, law-abiding Americans do,” Clarke, who resigned last week from his post as sheriff, said in a statement Tuesday. “It gives me the chance to do what I love most—promote President Trump’s agenda, including his fierce support for the American law enforcement officer, and ensure the will of the American people who got President Trump elected is not derailed by the left or the self-serving Washington establishment.”
In June, Clarke announced that he had rescinded his acceptance of a post in the Office of Public Engagement for the Department of Homeland Security. However, the office had never confirmed that it offered him the job, in which he would have served as a liaison between DHS and state and local law enforcement.
Since his resignation last week, Clarke, who has been a loyal Trump supporter, had been rumored to take a post within the administration. 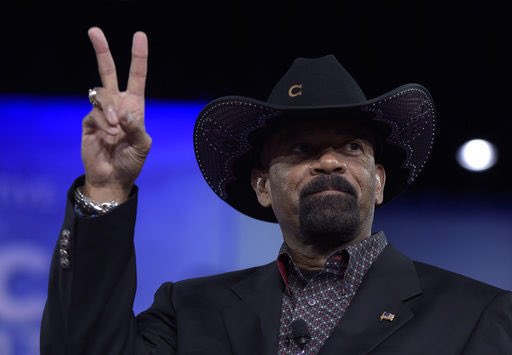 After nearly 40 years serving my community I’m retiring. What a ride! I will announce my future plans next week after the Labor Day holiday.

On Friday, DHS pointed Fox News to its announcement in June that “Sheriff Clarke is no longer being considered for a position within DHS.”
“His status with DHS has not changed,” a DHS official told Fox News. Also Friday, the White House told Fox News that it had “no announcement” in regards to a potential administration post for Clarke.
“David Clarke is an American patriot, and we are very proud to welcome him to America First,” Brian O. Walsh, president of the PAC, said Tuesday. “Having spent a lifetime in law enforcement –protecting and serving his community and fighting for justice and the Second Amendment –Sheriff Clarke doesn’t just believe in making America safe again; he’s devoted his life to it.”
Clarke had built a following among conservatives with his social media presence during the 2016 presidential campaign. He spoke at the Republican National Convention last July.
H/T: Fox News

The tax agency’s inspector general said in an audit released on Thursday that groups are being unfairly targeted by the IRS. Surprise, surprise, the groups...
Read more
police news

On the "Those Who Serve" blog in California, a police officer who has lost 8 co-workers poured his heart out in an open letter...
Read more
police news

An illegal immigrant is being held by border agents after he tried to kill a Bradenton police office. Lt. William Weldon was responding to...
Read more