Tremors have been recorded in South Korea that most of the experts say was likely a result of a nuclear detonation. Based on the measurements, NORSAR estimated it had an explosive yield of 120 kilotons. Hiroshima’s had 15 kilotons. South Korea suggests that it is more around 50 Kiloton.

NK officials claim that they have developed a hydrogen bomb that can sit on top of one of their missiles (which they proved just the other week could go over 1600 miles). This is a major event that seems to NOT be making major waves.

President Donald Trump has called the North Korean nation a “Rogue State” and made it clear that they can’t easily be dealt with. He has called out China saying it is “an embarrassment”, presumably about their inability to control their neighbor.

This is a serious mess, and the “weak arms” of government need to give TRump more freedom in dealing with this. He called it right when all others failed.

Seoul, South Korea (CNN)North Korea carried out its most powerful nuclear test to date on Sunday, claiming to have developed an advanced hydrogen bomb that could sit atop an intercontinental ballistic missile.

The bomb used in the country’s sixth-ever nuclear test sent tremors across the region that were 10 times more powerful than Pyongyang’s previous test a year ago, Japanese officials said.
While the type of bomb used and its size have not been independently verified, if true, the pariah state is a significant step closer to being able to fire a nuclear warhead to the US mainland, as it has repeatedly threatened it could if provoked.
Pyongyang has ratcheted up its ballistic missile testing this year and engaged in a fiery exchange of threats with US President Donald Trump. It has developed projectiles that it says could reach the US mainland, and some experts agree that’s likely true. 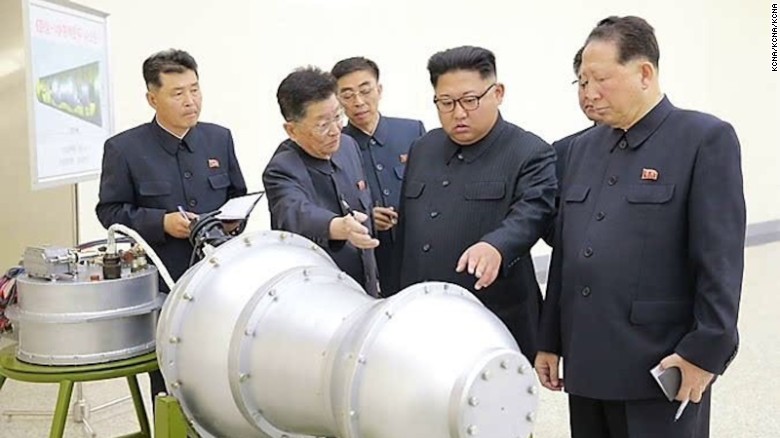 North Korean state media released images Sunday claiming that Kim Jong Un watched a Hydrogen bomb being loaded onto a new ICBM. That claim has not been verified.
Sunday’s nuclear test is the first since Trump took office, and the President condemned the test in a Tweet on Sunday morning.
“Their words and actions continue to be very hostile and dangerous to the United States,” he wrote.
“North Korea is a rogue nation which has become a great threat and embarrassment to China, which is trying to help but with little success.”
“South Korea is finding, as I have told them, that their talk of appeasement with North Korea will not work, they only understand one thing!”

8 times the power of Hiroshima bomb

The test came just hours after North Korea released images of leader Kim Jong Un inspecting what it said was a hydrogen bomb ready to be put on top of an intercontinental ballistic missile, the type of weapon the country would need to use to deliver a nuclear warhead to far-away locations.
Veteran North Korea state news anchor Ri Chun Hee hailed the test as a “perfect success” and the final step in attaining a “state nuclear force.”
The device was more than eight times more powerful than the nuclear bomb dropped on Hiroshima in 1945, according to NORSAR, a Norway-based group that monitors nuclear tests.
Based on the tremors that followed the test, NORSAR estimated it had an explosive yield of 120 kilotons. Hiroshima’s had 15 kilotons.
But South Korean officials gave a more modest estimation, saying that Sunday’s bomb had a yield of 50 kilotons.

Pressure on Trump and China

Whatever the explosive yield, the device was undoubtedly powerful, and the test offers the first hint that North Korea could be more developed in its nuclear program than previously thought. 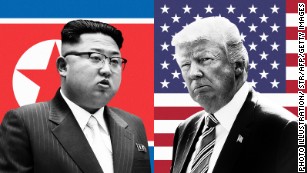 Opinion: What is Trump doing about the North Korean crisis?
The country has for years worked on nuclear miniaturization, which means creating a nuclear warhead small and light enough to be fired over long distances.
In a high-level national security meeting, South Korean President Moon Jae-in called the test “an absurd strategic mistake” that will lead to the international community further isolating Pyongyang.
But the sanctions that have been implemented to isolate the country have in many ways failed. The Kim regime has developed its weapons and nuclear program despite the measures that have crippled the economy and exacerbated periods of mass starvation.
The White House will be under global pressure to deliver a coherent response to North Korea.
It has been accused of sending mixed messages on the issue and lacking a clear strategy.
Trump’s administration is now pursuing what it calls a strategy of “peaceful pressure” to get North Korea to bring its nuclear weapons program to the negotiating table.
China is also under pressure to do more to deter North Korea’s provocations as its most powerful ally and patron. Beijing condemned the test Sunday.
“We strongly urge (the) North Korea side to face up to the firm will of the international community on the denuclearization of the peninsula, abide by relevant resolutions of the UN Security Council, stop taking wrong actions that exacerbate the situation and are not in its own interest, and return to the track of resolving the issue through dialogue,” the Chinese Foreign Ministry said in a statement.

Tensions between North Korea and the international community flared last week, when Pyongyang flew a ballistic missile for the first time over Japan. The US and its allies responded by sending fighter jets and bombers over the Korean Peninsula in a “show of force” operation.
Analysts have said for months that another nuclear test was likely on the way, with satellite imagery revealing that a new tunnel had been dug earlier this year.
“For months North Korea refrained from conducting a nuclear test and from launching missiles over Japan” said David Wright, the co-director of the Union of Concerned Scientists Global Security Program.
“It now seems to have decided to end that restraint.” 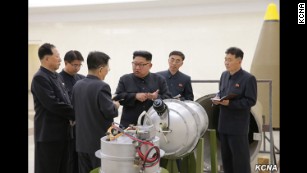 What happens when North Korea tests a nuclear weapon
Experts say it is nearly impossible to verify with certainty Pyongyang’s claim that it detonated a hydrogen bomb, which is also known as a thermonuclear weapon, or whether it can be used successfully on a missile.
Thermonuclear weapons typically use a fission explosion to create a fusion reaction, which is far more powerful than a fission reaction.
Sunday’s test comes almost one year after Pyongyang’s fifth nuclear test last September, which triggered a 5.3-magnitude seismological event. That took place on September 9, the country’s Foundation Day holiday.
North Korea claimed it set off a thermonuclear weapon during that test, but experts said the data showed it was more likely a boosted fission weapon.
H/T: CNN
Facebook
Twitter
Pinterest
WhatsApp
Previous articleCop’s Letter to BLM and Antifa after 8 Co-Workers Buried
Next articleTrump's Final Decision on DACA